The full cast for Chichester Festival Theatre’s production of The Pajama Game, which opened at the Shaftesbury Theatre on 13 May 2014, following previews from 2 May – booking to 13 Sep 2014.

The Pajama Game was directed by Richard Eyre, designed by Tim Hatley, lighting by Howard Harrison, sound by Paul Groothius, choreography Stephen Mear. The show had a sold out run at the Chichester Festival Theatre in 2013. It has words and music by Richard Adler and Jerry Ross, book by George Abbott and Richard Bissell, based on Bissell’s novel 7 ½ Cents.

In 1950s America, love is in the air at the Sleep-Tite Pajama Factory as handsome new Superintendent Sid Sorokin falls head-over- heels for firebrand Union rep Babe Williams. Sparks fly when the employees are refused a seven-and-a-half cents raise, leaving Sid and Babe deliciously at odds as the temperature rises. . . Will love, eventually, conquer all? 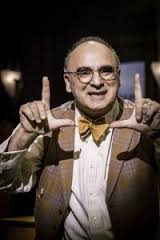 As Vernon Hines in Pajama Game