He played an Iraqi doctor called Khalid at The Glasgow Citizens Theatre in a new work called The Choir, with a book written by Paul Higgins and music and libretto by Ricky Ross of the band Deacon Blue. Read the comments and reviews from audience members here. And see the production photos here. 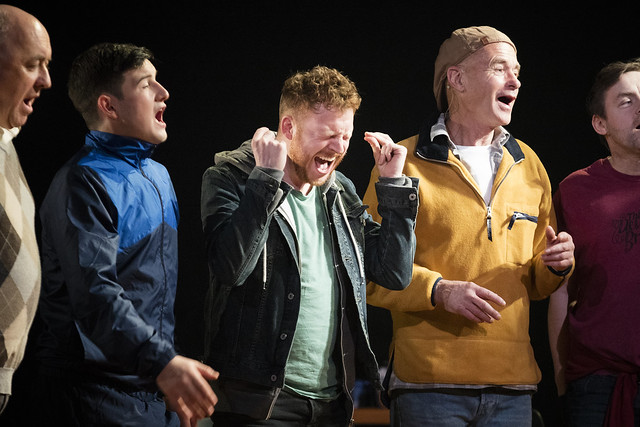 Poly starred in The Choir at Glasgow Citizens Theatre during November and December of 2015. It was new musical created by Deacon Blue’s Ricky Ross and actor writer Paul Higgins.

Here’s one of the songs on Soundcloud. It’s called Most Of Me.
“feel-good show…lovingly staged”
The Times★★★★

“dramatic hymn to the power of song.”
The Herald★★★★

“funny and unashamedly humane piece of theatre”
The Telegraph★★★
PRESS
“I enjoyed creating music for the stage and discovering new ways to tell stories through song.” The Sunday Post

“The whole thing is very exciting, and nerve-wracking as well…It’s a big deal.” Sunday Herald

“It’s all about the music, and how people reveal themselves through song.” Deacon Blue’s Ricky Ross and writer Paul Higgins reveal the motivation behind creating The Choir in The Herald

“The Choir offers this perfect backdrop, and the reason why people come together.” Singer songwriter Ricky Ross talks about creating The Choir in The Evening Times

“It’s good for your health to sing with other people.” Writer Paul Higgins talks to The Daily Record about why he loves singing.

“It doesn’t get more relevant than now.” Songwriter Ricky Ross in Scotland on Sunday about why The Choir has its finger on the pulse.

“it was important to me that we create a down-to-earth story with characters worthy of my hometown of Wishaw” Writer Paul Higgins on setting The Choir close to home in The Motherwell Times .

The full cast were as follows…

Ryan Fletcher was a cast member in the original West End production of smash hit musical, Once, but is known closer to home for his stage work in Black Watch and Beautiful Burnout (for NTS) and for TV appearances in Gary Tank Commander, The Limmy Show and River City. Myra McFadyen, whose work for stage includes Glasgow Girls and The Missing (NTS) and Interiors (Vanishing Point), as well as the film and stage versions of Mamma Mia, will also appear.

The Choir is a funny, gritty but ultimately heart-warming musical play set in Wishaw about a group of strangers who come together, not always willingly, to sing in a community choir. Directed by Citizens Theatre Artistic Director Dominic Hill, The Choir is written by Paul Higgins, best known for his TV roles in ‘Utopia’ and ‘The Thick Of It’, and features original songs written by Deacon Blue’s Ricky Ross. The Choir is the first production to emerge from a partnership between the Citizens Theatre and Ambassador Theatre Group (ATG) which has been established to create brand new musical theatre using the talent of local writers and composers.

It ran from 24th October – 14th November 2015. The Ambassadors Theatre Group have plans to bring the work to a wider audience and are making plans take this production on a tour in April of next year.